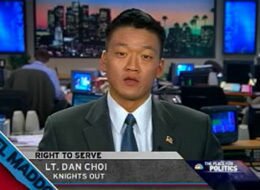 Lt. Dan Choi, an Arabic speaking linguist was recently fired for being honest about his sexuality. In one of his appearances on MSNBC’s Rachel Maddow show, Choi mentions that the army teaches everyone to live and serve with integrity and truth. He adds that by asking all soldiers to have to “lie” about who they are defeats the whole code of being true and having full integrity. Currently an online petition sponsored by the “Courage Campaign” is trying to appeal to the White House to repeal the “don’t ask don’t tell” regulation. We encourage all those to sign it so that our soldiers in America can live truthfully and serve honestly for their country.

MADDOW: This week, those three words cost Dan Choi his military career as well. He has received a letter from the U.S. Army informing him that he is being dismissed, it says, in part, quote, “this is to inform you that sufficient basis exists to initiate action for withdrawal of federal recognition in the Army National Guard for moral or professional dereliction. Specifically, you admitted publicly that you are a homosexual, which constitutes homosexual conduct. Your actions negatively affected the good order and discipline of the New York Army National Guard.”
Joining us now for his first interview since being informed of his dismissal is U.S. Army 1st Lieutenant Daniel Choi. Lieutenant Choi, thank you so much for coming back on the show. Good to see you.

CHOI: Good to see you face to face, yes.

MADDOW: You knew there was a very good possibility that by coming out publicly on this show, you would get kicked out of the military.
But I have to ask what your reaction was when you actually got the letter this week.

But the biggest thing that I’m angry about is what it says about my unit. It says that my unit suffered negative good order — negative actions — good order and discipline suffered. That’s a big insult to my unit.

I mean, all the insult that the letter can do, to say that I’m worthy of being fired, you know, that’s nothing comparing to saying that my unit is not professional enough, that my unit does not deserve to have a leader that is willing to deploy, that has skills to contribute.

MADDOW: In terms of the good order and discipline allegation, what has been the reaction that you got from your fellow troops, from your unit after you told them that you are gay? Was there upset, was there discord? Were there any negative consequences to your ability to function as a group?

CHOI: Two weeks after I appeared on the show, we had National Guard training. Basically, we went to marksmanship qualification. We shot our rifles. And I was leading some of the training as officer in charge, telling them to cease fire or fire, and I thought, for four days, nobody was saying anything, so maybe they don’t watch TV or maybe they don’t read the “Army Times.” But at the end of the training, so many people came up to me, my peers, my subordinates, people that outranked me, folks that have been in the Army — and this is an infantry unit, infantry men that — coming up to me and saying, hey, sir, hey, Lieutenant Choi, we know, and we don’t care. What we care about is that you can contribute to the team. And what leaders do, they look to see how can they make the best team before they go to war.

That’s what they care about.

MADDOW: Dan, what recourse do you have? Do you plan to challenge this?

CHOI: Well, the letter says that I can basically do a couple of things. I can resign right now and get an honorable discharge, or I can fight it.

I intend fully to fight it tooth and nail. I believe that “don’t ask, don’t tell” is wrong, and what we really need to be encouraging soldiers to do is to don’t lie, don’t hide, don’t discriminate, and don’t weaken the military. That’s what we need to be promoting.

MADDOW: Lieutenant Dan Choi, stay with us just for a moment. I want to bring into the conversation Congressman Joe Sestak. He’s a Democrat from Pennsylvania. He’s a retired U.S. Navy rear admiral. He’s the highest-ranking former military officer to serve in Congress. Congressman Sestak, thank you so much for joining us tonight.

MADDOW: What is your reaction to Lieutenant Choi’s impending dismissal from the Army as a result of “don’t ask, don’t tell?”

SESTAK: First, Lieutenant, thanks for your service to our nation. And I think this is indicative of the kind of quality of man and woman that we have lost. Look, I went to war, and we knew by survey that when I went to war that we had a certain percentage in that carrier battle group, and when I was on the ground briefly in Afghanistan, that were gay. And now we come back to America and say they don’t have equal rights. I’ve never understood it. This is something where we have to correct this. It’s just not right.

I can remember being out there in command, and someone would come up to you and start to tell you — and you just want to say, no, I don’t want to lose you, you’re too good. Congress, with this president, needs to act upon this. I have appreciated that the president is rightly focused on economic security and now with this budget, but I believe this summer or early this fall that we need to correct this.

MADDOW: When the president says, Admiral Sestak, when he says that it could be slow going in part because it has to move through Congress — and again, we know this because he wrote it in a handwritten letter to somebody who is currently being kicked out of the military, as Lieutenant Choi is — he’s essentially saying that Congress will be part of the reason that this needs to go slow. But you’re saying that this could actually happen quite quickly.

SESTAK: I think it could, yes. I think the president as commander in chief needs to be the one that says to the military — and I understand what Secretary Gates said recently about the plate is kind of full — that’s not the Defense Department’s decision. This is the commander in chief’s decision to say we need to change it, which he has.

I’d like to see us move it by this summer, and I think we can. We had hearings a year ago, and I’m a co-sponsor of the bill, and I testified at it. But we never got it out of committee. But I honestly believe with this particular president — let’s just re-emphasize that everyone, everyone is created equal.

MADDOW: Do you think, Congressman Sestak, do you think that as an interim step, if it can’t be done by the summer, if it can’t be done some time soon for some reason, do you think that the president could order the military to stop investigating whether people are gay? Just stop implementing the policy for now until it can be reviewed, until Congress has a chance to decide if they’re going to act on the matter? Would that be wise?

SESTAK: I’m not sure. The reason I say this is we are a nation of laws. And in this last administration, we saw executive actions that seemed to bend, if not break, those laws. And even though it’s for the right reason right now, I’d like to see us take this on right now, begin the process.

And I know there’s several of us veterans here — Patrick Murphy, Eric Massa, myself, you know, warriors, veterans, like the lieutenant, that want to, as Ellen Tauscher, who is the primary mover of this, goes off to the State Department, that we can pick it up as co-sponsors, and hopefully rapidly move it. If it’s a law, I think we should do it by due process.

It’s not that I don’t want the president to do it the other way, but, you know, the last lessons that we’ve learned the last eight years, let’s do it, and we should be doing it.

MADDOW: Congressman Sestak, since we have you on, I would be remiss if I did not ask you if you have made a decision yet on whether to challenge Arlen Specter for the Democratic Senate seat in Pennsylvania.

I should say that on the subject, we tried all day today to try to verify Senator Specter’s position on “don’t ask, don’t tell,” and were not able to get any sort of explanation from him of his position on that subject yet. We’re hoping to get one, but have you made a decision about whether or not to challenge him?

SESTAK: I haven’t. But I will say that the decision for having him — having left his party, come over here, actually has moved me much more closely to it. I now — I respect the political Democratic establishment in Washington made this decision, but we’re independent in Pennsylvania, and I believe that we need to make that decision.

And my concern right now is, having watched Arlen vote against the president’s budget that’s going to retool our economy, healthcare, which is costing us $100 billion a year in loss of economic productivity, education and energy reform.

So my take on this is that I’ll continue to watch for a bit. But I have to tell you, I’m very serious that if we don’t have an individual who believes in the policy, and then when you look at them and see the cut of their jib, so to speak, and say, will he be there with us, not just today but after the election, up through 2016 — I am not going to hesitate to get in this race. Because the future, Rachel, is just too important.

There’s many issues, from health care to energy and others, that I think have moved me and kind of given me a little bit more fire in the belly to say, this is not right. And I think — I’ll watch for a bit, but it will be a bit.

MADDOW: Before we go, I want to bring back in Lieutenant Daniel Choi into this conversation. Dan, when you hear Admiral Sestak there say that he thinks this could be done this summer, and that Congress could do it, maybe the president could do it on his own, but Congress ought to do it because it’s the right way to do it and it’s the straightforward way to do it, how do you feel about that?

CHOI: Well, I’m not a politician myself. I just, like so many thousands of others, gay and lesbian that are in the Army, that are in the armed forces, raised their right hand, they said — you know, we’re in a time of war right now. It’s not about what timing is good or bad. It’s not about what you want to do. It’s about what your responsibility is. We’re saying that we’re standing up to our responsibility and we’re saying we want to serve.

MADDOW: Dan, good luck to you.